Use my referral code for free, unlimited Supercharging, along with $1,400 in credit toward a new Model S or Model X by Tesla Motors:

Around the holidays, I was aghast at what I felt were hate-driven posts by Adam T. Wallington. He added me as a Facebook friend years ago.

I wrote Adam Wallington in private to question him on the posts. He publicly posted the private chat on his Facebook wall.

It is worth noting that I have not received any cease & desist from Adam Wallington, nor contact from police on this matter that I raised to the police on Twitter. In fact, Adam Wallington has kept me as a Facebook “Friend”.  Despite these facts, Justin Preston has written that I am harassing. Given my experience with Adam Wallington and Justin Preston, I feel it is important to expose these people who claim to “Rise Against Bullying” when committing such things themselves, or covering it up, or accusing me of harassment that has no substantiation. 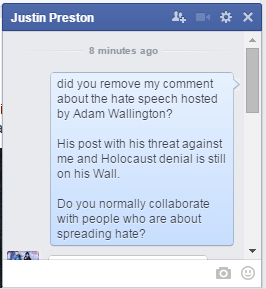 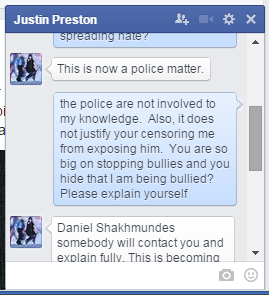 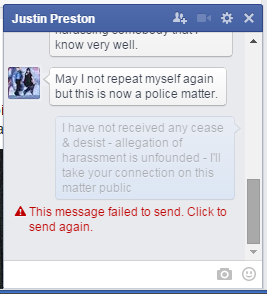 Update – 19h30 – as a result of messages & Tweets made by Justin Preston today, I became concerned with there possibly being a police matter already open by Adam T. Wallington and/or this Justin Preston.  So, I called the Toronto Police myself.  Two police officers joined me to review this matter.  The review concluded with them being unable to find any existing reports; was Justin Preston lying?  The police advised me of the following, which they said they had contacted Adam T. Wallington and advised him of as well:
1)  We’re entitled to our own opinions per the Canadian Charter (of Rights & Freedoms)
2)  the police are filing a report (15-260955) invoking our three names
3)  Adam T. Wallington & I must not contact each-other again (à la “cease & desist”) otherwise it will constitute as harassment
4)  Adam T. Wallington reported that he was frustrated that I contacted a female Facebook friend of his who commented against me on Facebook.  I find it interesting that Adam T. Wallington did not make it clear to the police that it was a mutual Facebook friend (even still) and my contacting her was not unique or new.  Anyway, I will now block Adam T. Wallington, as he has yet to do so – one less hate-promoting frenemy – done.  Might as well unfriend the frenemy’s lackey frenemy who felt that I shouldn’t have defended my beliefs & myself in the face of such hate & bullying; done.
5)  I have the right to write/speak of my experience with Adam T. Wallington and Justin Preston.  I hope people will read this page and see what kind of hypocrite is the founder of “Rise Against Bullying”.
6)  The police did not consider my actions harassing and this adds to the fact that Justin Preston has made a false claim against me to support the hate and bullying of [his cousin?] Adam T. Wallington. 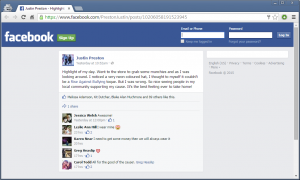 Update Feb.14 15h45 – I now have a video of my police report available upon request – I will not be publishing it, but I have it for anyone who wants to hear the discussion I had with the police – the more I think about what happened, the more it seems to me that RiseAgainstBullying is a commercial interest for profit and/or marketing.  Justin Preston tweets about how pleased he is with local community buying his hats, while he claims Adam T. Wallington is his cousin and I’m harrassing that person by exposing public hosting of Holocaust denial and threatening me.  Is it me or does this situation make one of the following points:
1)  “Bullying” is bad, but Holocaust denial and threatening someone is OK.
2)  If you’re family (e.g. a cousin) of Justin Preston, the founder of Rise Against Bullying, in his eyes it’s OK to bully someone by undermining an international tragedy like the Holocaust, which resulted in the murder of that someone’s family members, and it’s OK to threaten that person if they stands up against it.

You might be reading this page and wondering, how did Daniel Shakhmundes get connected to such vile & hypocritical creatures…  Well, it’s simple…  Years ago, someone (still have to dig through messages to recollect who) introduced me to Adam T. Wallington, so that I could help him with computer parts.  I’ve been into computers since childhood, so a lot of my acquaintances consider me a go-to person for technology.  By now I have over eight hundred “friends” on Facebook – more than I can keep up with even on a monthly basis – as a result, I engage some of my contacts once-a-year or less.  I try to contact people around opportune times like their birthdays and/or the holidays.  Over the Christmas holidays, when having a look at Adam T. Wallington’s profile, I found a lot of virulent anti “Zionist”, anti-Israel content on Adam T. Wallington’s Facebook – the substance of it gave me the impression that it wasn’t just about non-violence, but it was stemming from Jew hating (people call it anti-Semitism, but Adam T. Wallington wants to play games with the word “Semite”, so let’s just call it “Jew hating”) – first, I tried writing him privately, as it’s the diplomatic Dale Carnegie thing to do, but let me leave today’s update with Adam T. Wallington’s explanation of why he took the private chat public, because if this isn’t bullying then I don’t know what is:

I got a link from @_adamhutch the other day, and it was a big deal.  Remember, how fundamental was the understanding to web/digital/marketing/SEO professionals that text-in-images can neither be indexed nor edited?  Well, there’s a new project in town, Project Naptha, which has solved that issue brilliantly.

Check out the website, which has a live demo right on the homepage: http://projectnaptha.com/

I expect to see this development cascade its impact to search engines, copying & pasting, and even storage…

Other blog-posts about Project Naptha:

Thanks to the release of new updates for WordPress, I was driven to spend some time updating this website, and why not add a new post while I’m here… 🙂

Check out Shak’s latest experiment: The Liberty Village Cam!  Just launched Sunday, June 2nd, 2013. If you check it out soon, you’ll see that it was built in one day 😉  The Liberty Village Cam was only announced on Facebook & Twitter, until this post, so the social media engagement has been good, resulting in over 130 unique visitors within less than one day of operation.

We have an important custom WordPress website implementation to do for early January 2013, so what better time than the holidays to catch up on Shak’s own WordPress deployment!

Shak.Biz is now running the slightly significant new release of WordPress, which was published earlier this month – version 3.5, up from 3.4.x – read about it on WordPress News: http://wordpress.org/news/2012/12/elvin/

Along with the latest version of WordPress, the default Twenty Eleven theme had an update – version 1.5 – http://wordpress.org/extend/themes/twentyeleven.  It’s supposed to be more mobile-friendly…

The previously used Facebook plugins & widgets seem to be misbehaving if not broken, so they’re removed for now…  An overhaul of the social media is long overdue, but clients take priority 🙂

Tweets about “@CIXCommunity OR #CIX2012”

There is a link to a Dazzlepod page referenced in the above article, which lists email addresses of hacked accounts; check to see if your accounts are on the list!

Thanks to Jane E. for this news.

Thanks to Twitter Counter, it’s easy to display my Twitter statistics. Here’s the last week, as of whenever you happen to be viewing this page:

We haven’t written any new Posts in almost five months. There have been too many updates, both personal and software. Today, Shak is beyond sick of seeing the “Facebook Is Down Today” Post, so here is some new content.

Aside from all that website related stuff, we use the free virtualization software VirtualBox in daily business activity. It too has a new version released, 4.0.4, just four days ago. On top of an openSUSE 11.1 Linux host (KDE for Desktop/GUI), we run our accounting system (QuickBooks on Windows XP) in a virtual machine, and also an openSUSE 11.3 workstation environment (GNOME) communications (GNOME/Novell Evolution), web development (Quanta Plus), and other web-administrative activities (Firefox). Everything is up-to-date, of course 🙂

I hope everyone has had a great Family Day! Shak’s now going to go enjoy what’s left of his…